In my line of work, flu shots are optional only if you’re willing to wear a mask from November to April.  I have two days left to obtain said flu shot, or face the consequences.  Unfortunately, I woke up with a raging sinus headache and the beginnings of what will likely become a congested cough, so I couldn’t get the vaccine today even if I wanted to.I headed to the kitchen for some elderberry syrup that I made a few weeks ago…and realize sadly that it’s almost gone.  Somehow, I thought I had made enough to last a few months, but it was really delicious…and apparently, I’m not the only one who thinks so! But not to worry.  I have plenty of dried elderberries and all other necessary ingredients so I am simmering as I write.So what is it about elderberry syrup that would cause me to prepare a new batch immediately upon realizing I am almost out?  Especially when I’m feeling like this?

European Elder, sambucus nigra, also known as black elder or common elder, is a member of the Adoxaceae family.   It is a shrub or a small tree, with white flowers blossoming around mid-summer and berries appearing later and into early fall.  The fruit turns from green to red to dark purple when ripe and must be cooked before eating.  This is because the seeds, as well as the leaves and bark, contain calcium oxalate crystals, which are toxic to humans.  It probably won’t kill you, but will likely give you serious GI distress including vomiting and diarrhea.  Don’t worry, they are perfectly safe when cooked! Both elder flowers and elder berries are used medicinally, and are employed for a variety of uses.  For today, I’m only going to focus on it’s most well-known use – as an antiviral with a demonstrated clinical ability to shorten the severity and duration of cold and flu symptoms.  By up to four days when taken within 48 hours from the onset of symptoms.  The elderberry extracts not only inhibit viral replication abilities, but also boost immune response.  The polyphenolic compounds also have anti-inflammatory effects, so it may be effective for sinusitis as well.  We’ll see…

Elderberry tea, syrups, and extracts are widely available in drug and grocery stores.  They are often combined with other herbs in proprietary blends, and there are even formulations for children.  They can be pricey, but it is an option if you can not or do not want to make your own.  It’s not really that difficult and is definitely more cost-effective.Google “elderberry syrup recipe” and you will find dozens of recipes which all seem to be variations on a generic basic recipe.  I tweaked the ingredients to my personal taste and used what I have on hand.  I also added calendula, because why not?  I have plenty and it has numerous properties that should be useful in this brew.  I would have also included clove if I had any.

1 cup dried elderberries3 cups of filtered water3 TBS chopped, fresh ginger (I like ginger)2 cinnamon sticks 1 cup raw honey 1 TBS dried calendula petalsCombine berries, water, ginger and cinnamon in medium saucepan.  Bring to a boil, cover and simmer until reduced by about half.  (Around 45 minutes).  Remove from heat and let sit for about 15 minutes before adding calendula.  Stir, cover, and allow to cool until almost room temperature.  Using a hand-held masher, mash the entire concoction to get as much juice as possible, then strain through a fine mesh strainer or cheesecloth.  Add honey and stir until dissolved.  Store in a sterilized container and keep it in the fridge. 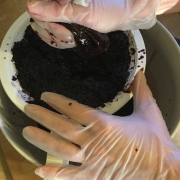 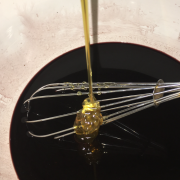 The recommended adult dosage is between 1tsp. and 1T per day for general immune support.  This increases to 1tsp. to 1T every 3-4 hours during an acute illness.  Trust me, it’s not hard to knock back a shot of this and want more…I might try it on pancakes!Sambucus Canadensis, also known as American black elder, is the variety that grows here in the northeastern US.  It’s a close cousin of European elder and the two are used interchangeably, so foraging for my own berries is an option.  I saw them growing everywhere this summer!  I should have picked and dried my own!  Or tried making elderberry wine…or jam.  I will definitely be doing that next year!For now, I’m going to relax with a cup of hot tea and pretend my head is not pounding.  I’ll let you know how it works out and I’ll be revisiting the elder plant in a future post!